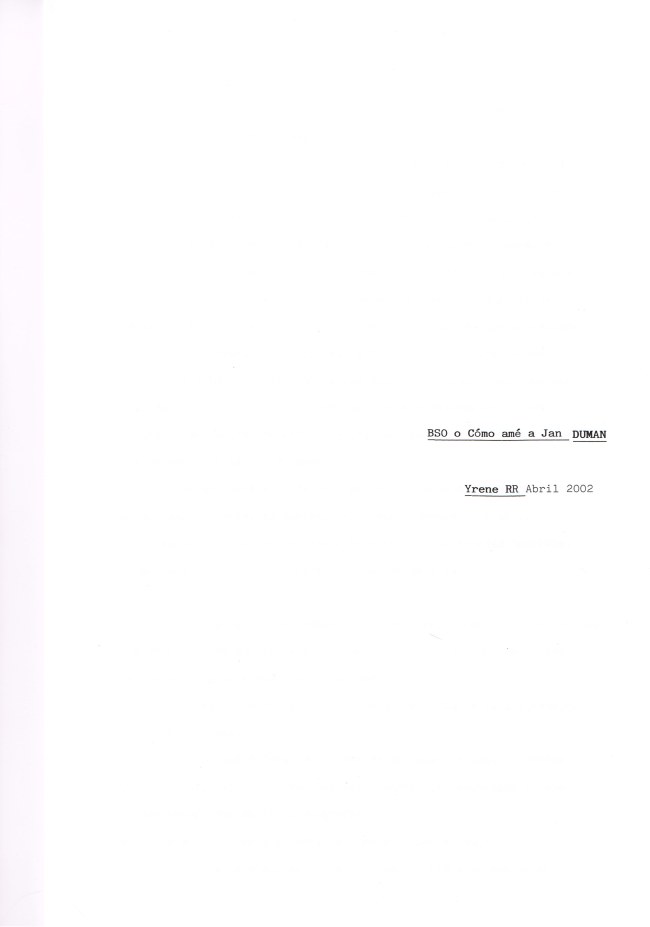 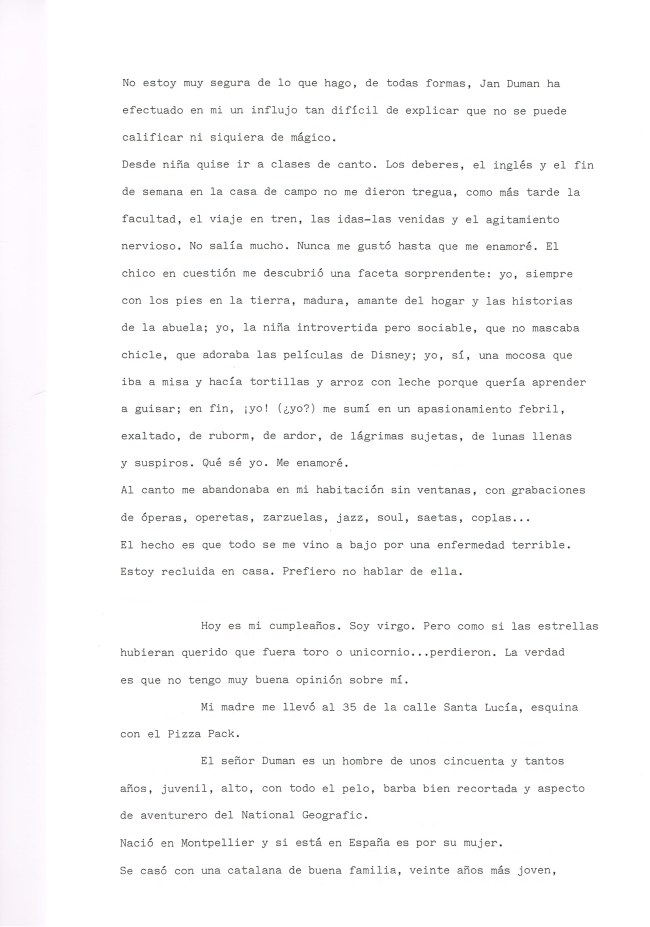 During my dreams I was totally free. Out of them, I’ve never been.
My mind has forgot its origens and it was feeling bad and strange handling a young body in a World created to fit…who knows whom? I envy you, Beatrix because you has not suffered not even one of the images of this end of century. I am aware that I can’t resume in a few lines the complexity of this world, to the one you don’t belong.
I know that maybe I blame a Time because of some personal insignificant circunstances. Insignificant for the Humanity. But not for me.
Now that has passed some time, I repent so much having met Manuela and Patricia, but not to have had fun, while I could, walking, having fantasies about my future, dancing.
The problems came later, When I understood that what I wanted was so different from what other persons from my age, wanted. Much more was hard for me to understand what it can be created in a mind that hates and acts with evilness, no matter the reason.
But it happened. And friendship lost the beauty of its wings and it metamorphosed in an ugly caterpillar. But I couldn’t see it.

Fidel, got tired of the brushes and missing the books, decided to go to study Psychology in France. There was living his brother with his mother, Francis, who has ready a room for him, in a house with garden and plenty of kids.
_ I saw them (Manuela an Patricia) buying the tickets for the movies.
The station was very different for me. It wasn’t grey, not shady neither sad, how it looks for me now.
_ Today?
He nodded.
They refused to go to the movies with me just the day before…
I felt…Weird. I know that with this world I can’t clarify what I felt, but  no other word comes to my mind. They told me that they weren’t feeling like going to the movies. “I’m a sciences person, I don’t like that bullshit” used to say Manuela. And so I went with my brothers, with my Mother and sometimes with Fidel. Sometimes alone.

Fidel was dragging the suitcase along the platform.
The clock was struck a quarter. In 5 minutes the train will began a nocturne trip to the Gauls.
_ Those girls aren’t for you. Trust me.
I sighed ruefully.
_ And who is for me? Tell me before you go and leave me alone.
I asked him laughing and Fidel move his head without knowing what to say. I noticed he was a bit sad. But it wasn’t for him, it was for me.
_ I will write to you every week.
_ You exaggerate.
_ I know… – he smiled.
The comptroller went out with his little marker and leaded to the head of the train.
We got the suitcase on the train and Fidel stamped two noisy kisses on both cheeks.
_ If you  refuse them, you will not be alone any more – this time his eyes showed he was being serious.
The train was going to leave.
_ Send me a photo of the horse painting when you end it!
_ And you one of the french men!

I accompanied the train in a smooth run looking how Fidel was waving his hand with the face illuminated with hope. He really wanted to go back to study…

The first postcard I got was a very pretty photograph of the Eiffel Tower in the Parisian dusk.

“Hello Paloma!
Finally I am here. You can’t imagine the feeling I had when I opened the books, all new…
I already take a look at them. The classes will begin in October and for now I already visited Paris. I hope you left those two bland girls. You must come, here there are lots of mulatto!
Au voir, sweet pie, kisses
Fidel – who miss you lots -“

I took it with me, in the pocket of my coat, until the season changed. But never show it to Manuela and Pati. We had arrived to an strange point of change, of transformation, to where what has had been couldn’t be any more.
The innocence of the 15 years old has converted into a vain mischief of the 18′.
And even though it was in sight of everybody, I wasn’t able to see it. I trusted them. My parents and my auntie Ana, my brothers…All of them talked about how a girl like me could go out with a girls like them.
But I only could see two good friends. I know. I just refused to see the reality and I let them to deceive me.
My mother always tells to me that I must not blame myself. I think so too. But it hurted so much, Beatrix…So much that I hate myself for not being like the others are, that’s why I try to analize myself, study me, look for me, understand me.
Oh, I’m sorry…I’m mixing present with past and this is for me like mixing water with oil. Imagine for you, who doesn’t know who I am and what I pretend to.
When you left to Hill Top, what were you feeling? Did you wanted to run away from the world? from your past? from yourself?

I also would love to leave, but I don’t know where. The Guadiana is my last grant to keep living searching a bit of peace. But I feel that the indestructible frostress that was for me is beginning to break down.
And that scares me.

Someone who needs to run away.

umpteenth time in my Life.
I took that morning six caffe latte, two croissants, one ensaimada* and

milky rice.
When I ended, I washed my face and the reflection returned to me a

pallid, ashen and ill visage. Good reason comparing to how sick I was

feeling. If I had not had diarrhea I don’t know what had happened to

me…I was feeling like dying.
I went out to buy bread and while my Mother made a selection of the

trash between glass, paper and plastic, I was waiting my turn.
_ What do you want, honey?
_ Four loaves of bread and a rounded one, sliced please.
The loaves were piled up in every wood’s shelving according to weight

and shape, separating the integrals from the rye breads, the soy ones

from the focaccia and the gummy loaves, surrogate of bread, more

known by the name baguette, from the laxative dinner rolls.
In the cupboard I could see: ensaimada, croissants, donuts, puff palms,

pie, honey cake, cheese cake with walnuts and raisins and cupcakes.
On the counter, to the left, big diet biscuits tins and to the right, the

chocolates.
There was not other boutique better than the Bakery for me. 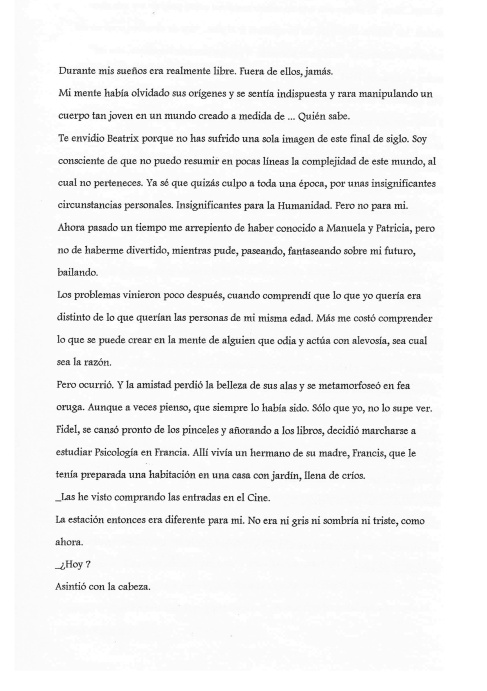 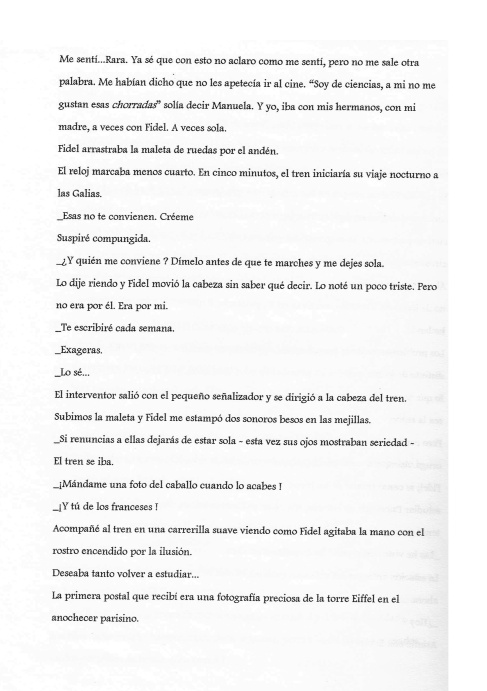 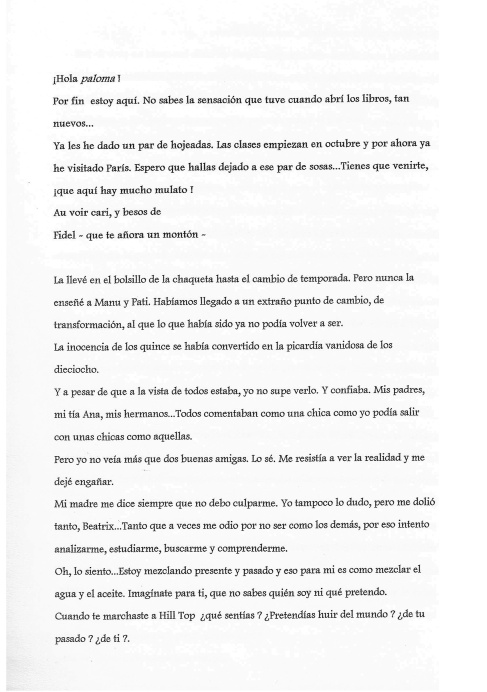 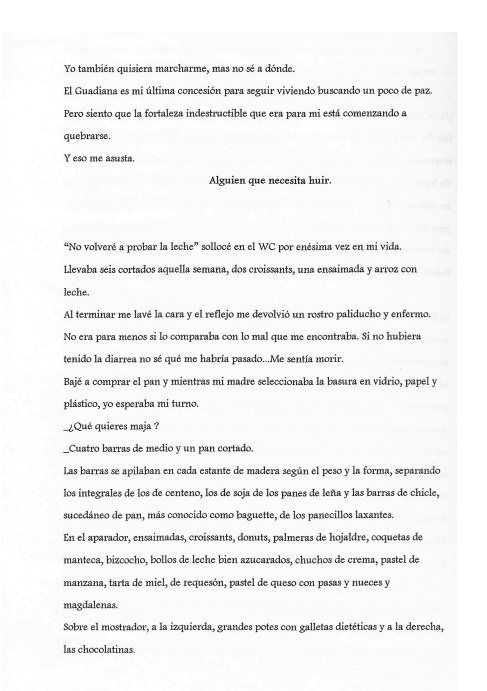 To be continued^_^) thanks for reading so far!! *bows*